What if we're already digital?

If we are living in a particularly important century, the probability that we're in a simulation increases.

Is this century important?

This month, Effective Ideas are offering mini prizes for blogs that discuss Holden Karnofsky's series on The Most Important Century — a set of blogposts that make a sober, clear-headed case that we live in an extraordinary era that will define the trajectory of human civilisation more than any other. Outlandish claims that have significant implications, such as those that Karnfosky discusses, are often dismissed simply because they are esoteric — but some ought to be taken seriously.

If it's true, it does seem to be quite a coincidence that we happen to be alive in the most important century! I wanted to discuss the implications of observing something quite so coincidental, but I realised that there are nuances to my views on what qualifies as 'important'. To try and clarify my thoughts here, I wrote my version of the 'most important century' thesis in my last blogpost, explaining why our choices might alter humanity's future trajectory in a way that no previous (or future) century could.

One of the most significant factors that makes this century seem so uniquely important is the possibility of digital minds. If you need convincing on the feasibility of this or want to know why their creation would be so consequential, the best resource is Karnofsky's post Digital People Would Be An Even Bigger Deal. The importance of this century doesn't just rest on digital people being created, but observing even the possibility of conscious digital people is notable. If it's possible to simulate conscious beings, then we could be simulated.

While we may create digital people, the simulation we're in wouldn't necessarily be digital — our existence may depend on 'reals', qubits, or something unfathomable to us, rather than bits. 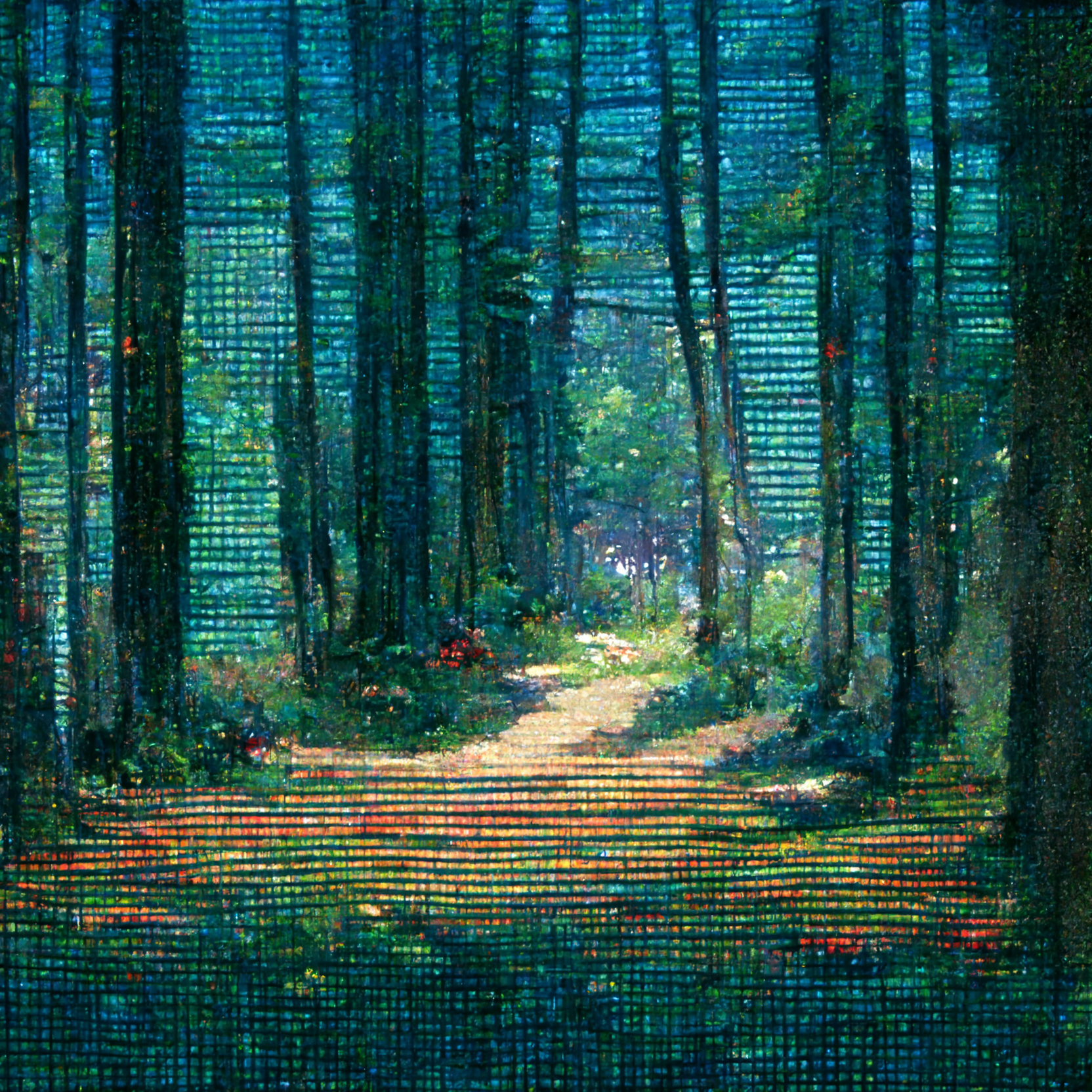 “Maybe you think the glorious forest around you proves that your world isn’t a simulation. But in principle, the forest could be simulated down to every last detail, and every last bit of light that reaches your eyes from the forest could be simulated, too. Your brain will react exactly as it would in the nonsimulated, ordinary world, so a simulated forest will look exactly like an ordinary one. Can you really prove that you aren’t seeing a simulated forest?"
(Reality+ by David Chalmers)

I recently read David Chalmers' book Reality+, which is a piece of 'technophilosophy' that does a pit-stop tour of the big questions in philosophy with thought experiments based around modern technology: 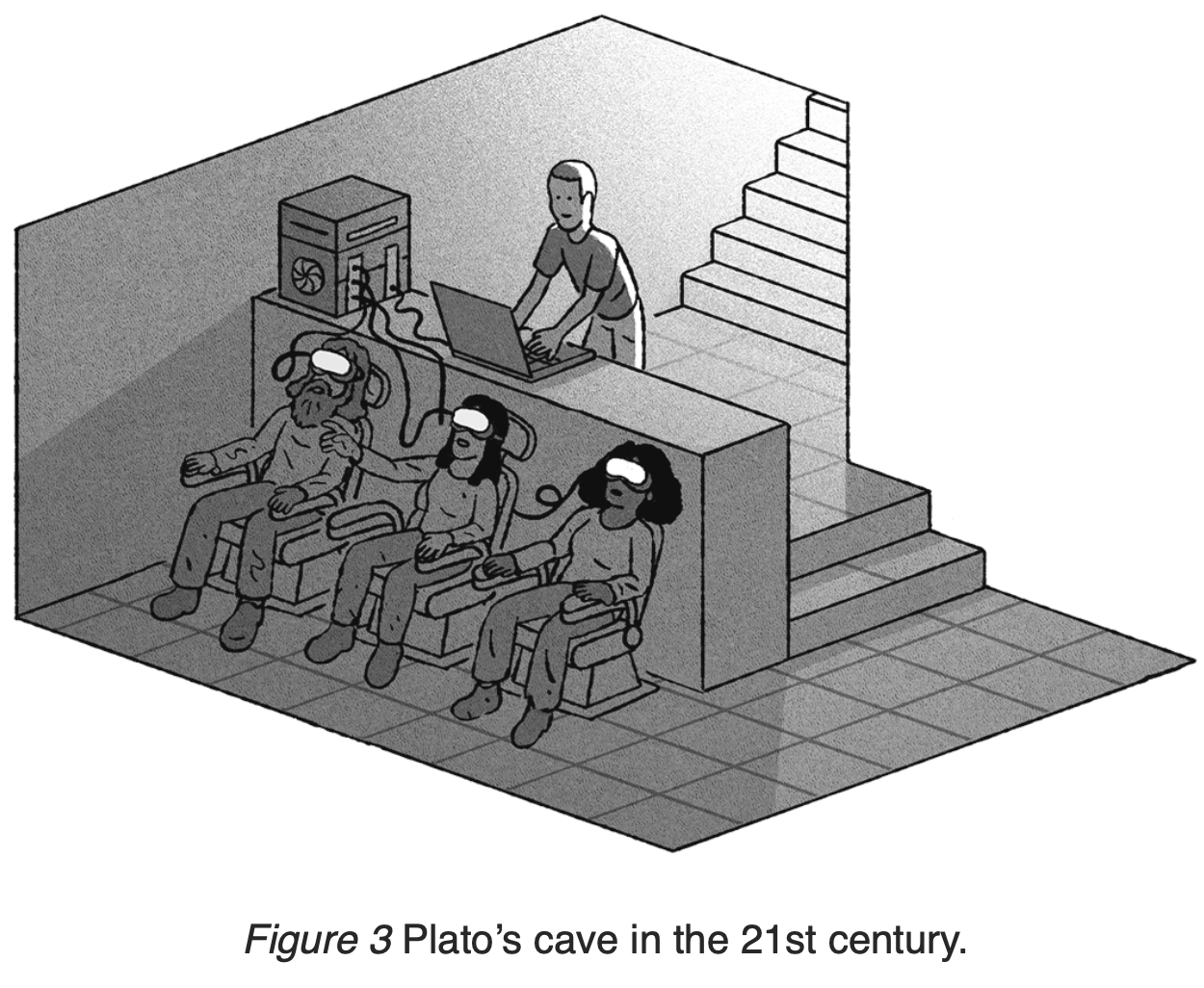 The simulation hypothesis is simply the hypothesis that we are living in a simulation, and proponents of it tend to think it is probably true because of arguments like the following (given by Chalmers):

(sim = someone who is in a simulation)

It's reasonable to suppose that there would be things that stop nonsim populations from creating sims. For instance, they might choose to not create sims that are conscious, perhaps out of moral concerns. We might want to reduce the probability of being simulated due to that, but it seems unlikely that all capable nonsims would avoid spinning up consciousnesses.

Objections like these might prevent the existence of simulated people, but Chalmers packages this up neatly into the following conclusion:

If human-like sims are impossible (scenario 2) 50% of the time, that leaves a 50% chance that they are possible. In these remaining situations, if there's 50% chance that nonsims avoid creating sims, there's a 25% chance that ~all conscious beings are sims.

Chalmers thinks (as do I) that (2) and (3) are unlikely; there's no obvious reason why human-like sims aren't possible, and the incentives to create them are so strong. So what's the probability that we're in a simulation? I don't know, but if we're generous to the sceptics and say that (2) and (3) each have a 50% chance of being true, P(simulation) = 25%.

Why would we be simulated? P(important | simulation)?

Some more from Chalmers: 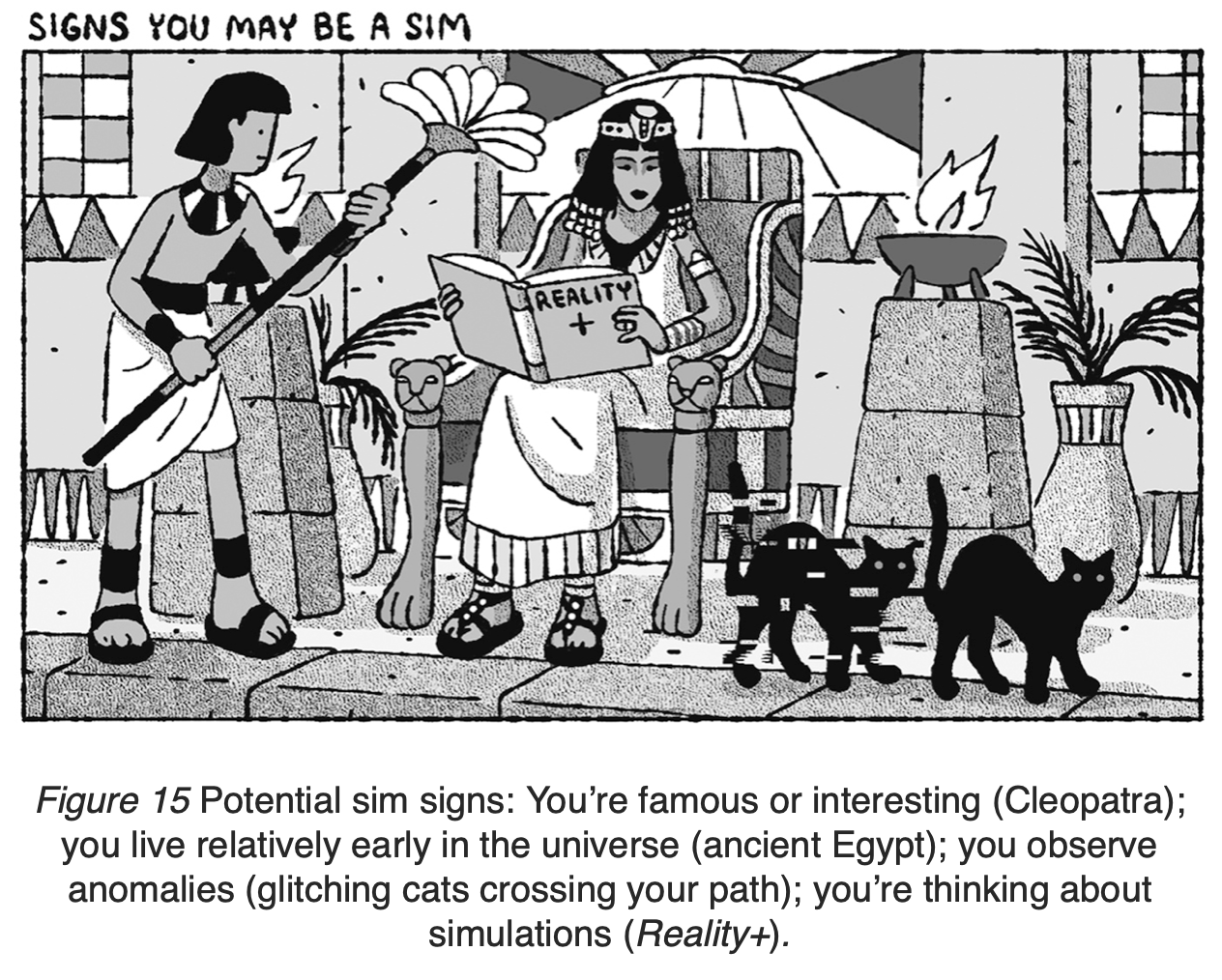 Why would our simulators be simulating us? My guess is that any simulator is likely to simulate a population fairly similar to their own. From our own observations, we can see that humans — like our hypothetical simulator — find value in running simulations. Additionally, whether it's for scientific purposes or a video game, our simulations are designed to be similar to our universe in some way. The less a hypothetical simulation has in common with its simulator's universe, the less likely it will be.

(Some aspects of the simulation may be different to the world above by necessity. For instance, we may have had our simulation capabilities restricted or delayed, in order to conserve our simulator's computational resources.)

So why would anyone expend their resources to simulate a universe like ours? Maybe it'll be for some relatively trivial matter, like finding out the universal, long-run effects of a new kind of detergent. However, it's reasonable to expect the quantity of computational resources (and hence number of simulations) to scale with the importance of the subject.

Because of that, the fact that this period of time looks particularly important, due to the highly consequential decisions we'll be making, is a pretty strong sim sign.

Anthropic reasoning all the way up

On first inspection, the claim that we live in the most important century seems immediately dubious to many. Statistically, it seems implausible. And we might be biased in our assessment: we may want it to be true, even if it's just for our own egos. If our century is important, then we can be important too.

What's even more dubious is claiming not only (1) that we live in the most important century, but (2) that this century is why our universe exists in the first place! It's a whole new level of narcissism. To help you assess whether this is just motivated reasoning, I'll give you some numbers.

Filling out the formula for P(simulation | important)

The probability that universes will want to simulate important things seems like it'll be high, but perhaps they'll mainly simulate things for entertainment or worthless market research.

To craft a prior for the ratio of 'important' simulations to 'not important' simulations, let's look at how compute usage is currently distributed. In 2015, global computing capacity was probably between 2×1020 and 1.5×1021 FLOP/s. Responsible for a portion of that computing capacity was the TOP500 supercomputers — which tend to be used for pretty important things — and their total performance came to 3.61×1018 FLOP/s, or 0.24–1.8% of the world's computational power. So, for simplicity, let's say these supercomputers did the only 'important' computing in 2015, and assume civilisations that run simulations split their resources similarly. That gives us 1% as a low-ball guess for the percentage of simulations deserving the label 'important':

And, as calculated earlier, we can claim there is something like a 25% chance that we are living in a simulation:

Getting a prior probability for living during an important time is pretty tricky to work out. Using Holden Karnofsky's priors, the chance we landed in the most important century is around 1 in 100,000 to 1 in 1,000. How about other centuries that were important, even if they weren't number one?

They didn't all last for a century — and forgive me for not accounting for population changes or important centuries in the future — but there are 13 technological revolutions on this list so I'm going to use that to say there have been 13 'important' centuries. (My reasoning for what counts as 'important' was discussed in my last post.) With all that, I'll say 13 in every 10,000 centuries counts as important (by my lights).

So, given that this century seems to be important, how much should I update my probability that we're in a simulation?

So — if we are indeed in a uniquely important time — I should update my beliefs of being in a simulation from 25% to 70%! At a minimum! 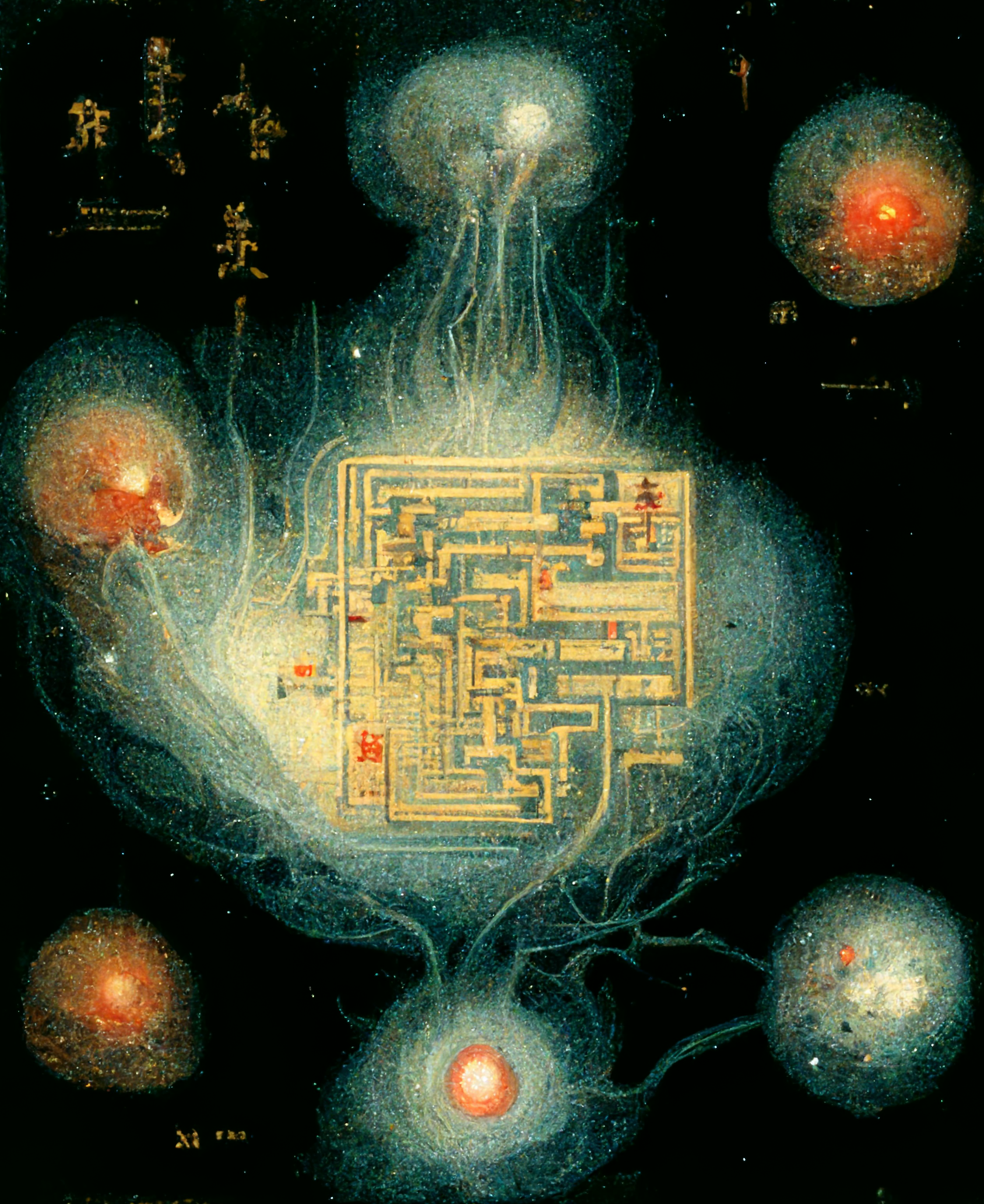 I'm inclined to name this one the 'it-from-bit hypothesis'.

Note: this result is very sensitive to the ratio of P(important|sim) to P(important|¬sim), but the factor of 7 implied with these numbers seems like a pretty lowball guess to me, and higher numbers only increase the chances that an important century is simulated.

In a bullet point in All Possible Views About Humanity's Future Are Wild, Karnofsky mentions the simulation hypothesis as a reason to be sceptical about humanity ever spreading throughout the galaxy. However, I don't think being in a simulation necessarily implies we should take his call to vigilance less seriously.

Granted, our simulators might terminate us as soon as we navigate through this time of perils. But even then, while our future might be smaller, the universe(s) above us would be even more vast than our own. If we survive these challenges in a way that sets humanity up for a wonderful, valuable future, our approach may be adopted by those observing us. May our best values propagate upwards!